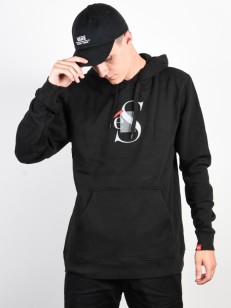 Men's hoodies are far from being skateboard or sport only, today they are mainly a part of casual fashion and sometimes even an integral part of workwear. They are comfortable, functional and look good. Classically, we divide them into zipper sweatshirts and sweatshirts over the head, both groups have their specific positives.

In general, sweatshirts are made of high-quality, warm material, such as pure cotton or cotton / polyester blends, and are fitted with a hood and practical pockets that can be stowed to carry all the important things. An important assortment of hoodies are men's sport sweatshirts (and men's thermo sweatshirts) made from functional fabrics that are breathable and absorb sweat. These are very suitable as a middle layer, for example under a snowboard jacket.

At Swis-shop.com you will find original hoodies in a full range of sizes, so choosing the right design and the right size with the right cut will not be a problem.