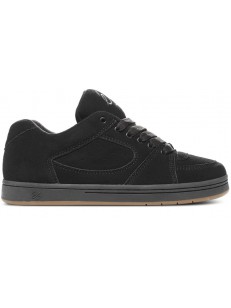 When riding on a skateboard, we are in contact with the board through feet and shoes. It is therefore necessary to have appropriate skate shoes. These are usually commonly looking shoes, but they use power of technology and design that make it easy to skate and often maximize the feel of it. Skate shoes have anti-slip grips, padded areas where the shoe comes in contact with the board during flips, or cushioning systems that minimize shocks and landing impacts that come up during tricks or jumps. Choose from skate men's shoes, ladies' variant and skate children's shoes designed for kids. We have a large number of models, sizes and brands.