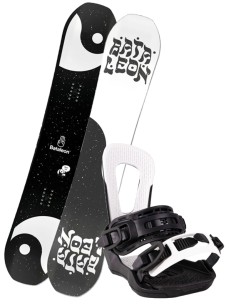 Gentlemen, are you looking for a suitable men's snowboard? For a beginner or an advanced? And what about checking our offer of men's snowboard sets that include not only boards, but also bindings and boots? We have mens snowboard sets for freestyle, freeride and all-mountain riding, for experienced and inexperienced riders, sets from leading world manufacturers such as Ride, Burton and Lib Tech, and sets in various designs and color variations. Choose yours at Swis-shop.com.

And where does this innovative technology lie? Three-dimensional shaping of Bataleon planks. The result is limitation of bite edges, much greater stability, reliable pop and perfect responsiveness. 3BT is also reflected in a better turn or more stable ride along the edges. Thanks to these features, Bataleon boards especially freestyle riders because they forgive rotating errors. But they will also be good for freeriders because they swim wonderfully in powder. In 2007, the Bataleon Snowboards received awards at the European Snowboard Industry Forum in the category of the most innovative company launched by the European magazine Source. Since that time, however, the Bataleon Snowboards has been staggered by a stable team of professional riders including Ethan Morgan, Shayne Pospisil and Shaun Murphy.