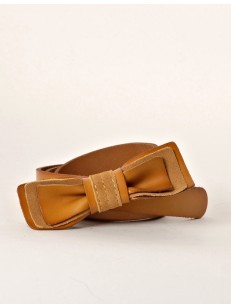 Women's leather belts are the most luxurious and top quality alternative to ladies' belts. Most commonly, bovine or bull skin is used for their production, which is the most suitable for its durability and appearance. Ladies leather belts are available in both wide and narrow variants and also in many different color designs that make it easy for you to choose the right one for you. In terms of design leather belts they are mostly made with a metal buckle, but there are also straps with a clasp.